Forget the corner office and enduring rush hour traffic. These days, the home office is where many of us are taking care of business. According to Census data, the number of people working from home at least half of the time has increased by 115% since 2005. As of 2017, the number of telecommuters in the U.S. workforce has risen to 3.7 million.

Still, working from home has its challenges. Without an organized workspace, the home/work environment can quickly become disorganized and stressful. Additionally, for those who live in a smaller home or apartment, it might not even be possible to dedicate an entire room solely to work. 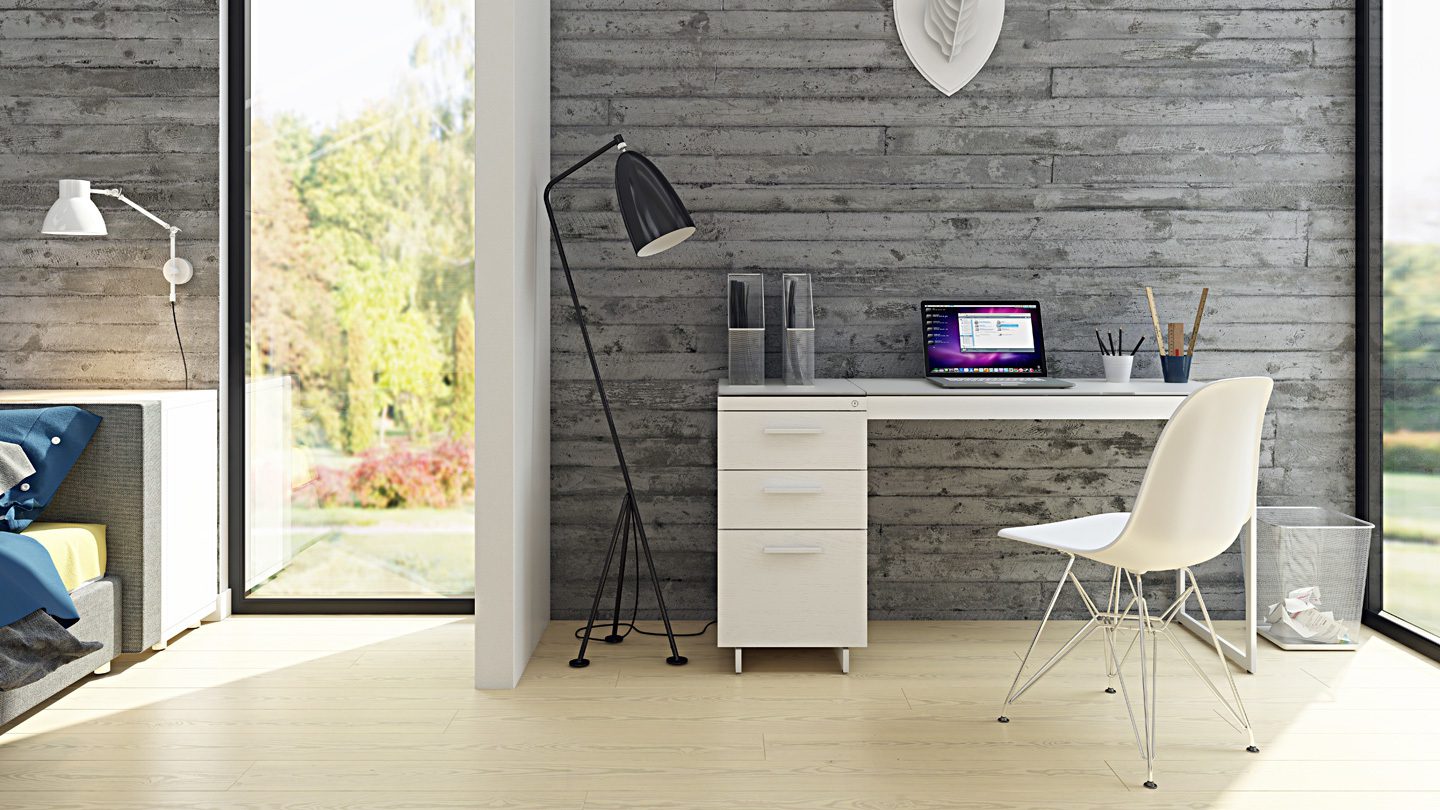 No room to spare.

For many who work from home and/or are living in smaller spaces, it might not be possible to dedicate an entire room for a home office.

One of the most important components to any remote-work setup is a good desk.

Since a good portion of the workforce is accustomed to working on a laptop or tablet, there’s no longer any need to take up too much real estate with a large desk or components. Modular office systems or a compact desk can make it easier to create a workspace that fits not only your needs but your floor plan.

Between a monitor, printer, cell phone charger, work phone, keyboard and desk lamp, the cord clutter can really begin to add up.

Any opportunity to eliminate cords — from wireless printers, keyboards, and mice, to bluetooth speakers — is going to help tidy up and organize your space for improved productivity. Meanwhile, furniture with built-in cable-management systems - like many of BDI's office collections - will keep everything else in place and out of the way.

When every square foot counts, sometimes a formal desk just isn't an option.

A sturdy laptop table can do double duty as a convenient work surface and side table, while a wall-mounted desk can make the most of vertical space when there isn’t much room to spare. In these instances, it’s important to make sure the furniture is well-designed and blends in beautifully with your décor, especially if the furniture is sharing space with another room in the house.

In homes where space is at a premium, or no dedicated home office exists, homeowners must often make creative use of space when placing a desk or workstation.

If you have an open floor plan, try tucking your desk behind the sofa, or even let it float in front of a shelf or credenza. Better yet, find unused wall space or wasted nooks that could be transformed into your office HQ.

Whatever your vocation, specific organizational tools are always necessary. But clutter — even from functional items — can slow down your productivity when working in a tighter space. Mobile cabinets for files and folders mean everything is at your fingertips when you need it and can be neatly tucked away when you don’t.

Selecting a desk with built-in file storage can go a long way towards reducing the square footage needed to create a proper workspace in a smaller setting.

Making efficient use of shelving in your work area allows you to artfully arrange your books, awards, framed photos, small electronics and other work-related materials, while keeping them off your work surface.

By taking advantage of a room's available vertical space, the right shelf can do wonders to reduce your footprint, while providing ample storage and display space for office essentials.

Whether you’ve turned a spare bedroom into a home office, or fashioned a corner bedroom nook into your workspace, having the right furniture for small space working can turn any home office set-up into success for you.

If you have an advice for maximizing smaller workspaces, feel free to share them in the comments section.